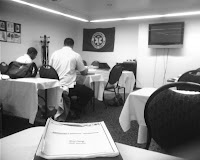 Today I successfully treated a trauma patient who had fallen off of a bull and was kicked and stepped on. He had a compound fracture of his left femur, and flail chest also on his left torso. I did on-site stabilization, got him on a spine board, and did a rapid transport to the closest hospital while I did a more focused examination and monitored his vitals.

OK, so it was a mock scenario, but it was cool. Hopefully, I'll be able to really help someone in that kind of situation soon. Of course, around here it's more likely to be a redneck who was run over by his 4x4, but who knows.

I seem to be spending a lot of time in classrooms lately. Probably should get used to that, huh.
Posted by wdsims3 at 11:11:00 PM