So, I've recently been intrigued by the story of Steve Prefontaine, arguably one of the most dynamic characters in American running ever. Interesting fellow. If he truly ran, and lived, as his coach Bill Bowerman described in his all to premature eulogy, then he is an inspiration. 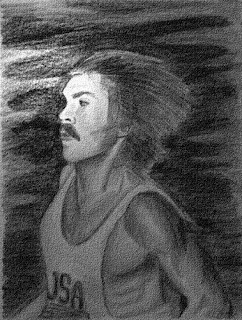 "All my life, man and boy, I've operated under the assumption that the main idea in running was to win the race. Naturally, when I became a coach I tried to teach people how to do that. Tried to teach Pre how to do that. Tried like hell to teach Pre to do that. And Pre taught me. Taught me I was wrong. Pre, you see, was troubled by knowing that a mediocre effort can win a race and a magnificent effort can lose one. Winning a race wouldn't necessarily demand that he give it everything he had from start to finish. He never ran any other way. I couldn't get him to, and God knows I tried . . . but . . . Pre was stubborn. He insisted on holding himself to a higher standard than victory. 'A race is a work of art' is what he said and what he believed and he was out to make it one every step of the way.

Of course he wanted to win. Those who saw Pre compete or who competed against him were never in doubt how much he wanted to win. But HOW he won mattered to him more. Pre thought I was a hard case. But he finally got it through my head that the real purpose of running isn't to win a race. It's to test to the limits of the human heart. That he did . . . No one did it more often. No one did it better."