"Even when there was no reason for hope, Abraham kept hoping—believing that he would become the father of many nations. For God had said to him, “That’s how many descendants you will have!” And Abraham’s faith did not weaken, even though, at about 100 years of age, he figured his body was as good as dead—and so was Sarah’s womb.  Abraham never wavered in believing God’s promise. In fact, his faith grew stronger, and in this he brought glory to God.  He was fully convinced that God is able to do whatever he promises." Romans 4:18-21 (NLT) 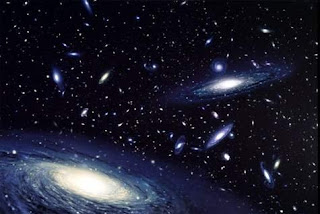 I have been thinking a lot lately about how BIG God is.  Creation of the universe, the diversity of life, even our own human bodies are marvels that even modern physics and science cannot completely explain and certainly cannot replicate.

Abraham had been told by God that he would be the father of many nations and that they would be blessed through him.  Problem is, he and his wife were quite old.  He was 100 years old, in fact.  (Remember, no Viagra back then.)  So, that must have seemed completely impossible to Abraham, but he "kept hoping--believing that he would become the father of many nations".  Hope is defined as a confident expectation, not a questionable outcome as many use the word today.  He was confidently expecting that God would fulfill everything that He had promised.  In this, Abraham's faith grew stronger.  I don't know about you, but to me that seems counterintuitive.  Our normal reaction is the longer something does not happen, the less we believe it will ever happen.  Our faith diminishes.  However, Abraham took a much different approach.  He determined that he was going to take God at His word and "never waver in believing God's promise".  Time went by, he was older than dirt, nothing happened.  Sarah's faith wavered, but Abraham stood firm.  Eventually, everything happened just as God said it would and Abraham is the father of many nations.

This makes me think of my own faith.  If I believe that God is so BIG and has done such great things as create the universe, why would I not have complete faith in all that He has said and promised?  Why does it matter that something He has promised takes weeks, or months, or even years to be fulfilled?  I'm still working on the answers.  I wish I could say that my faith was as strong as Abraham's, but it's not.  I still have doubts.  My hope sometimes disappears.  I begin wondering if God was just playing a cruel cosmic joke on me.  Then, verses like Rom 4:21 come back to mind --  "[Abraham] was fully convinced that God is able to do whatever he promises." -- and I am challenged to believe, to stand firm, to confidently expect God's fulfillment of ALL His promises.


"Now all glory to God, who is able, through his mighty power at work within us, to accomplish infinitely more than we might ask or think."  Ephesians 3:20 (NLT)

Hello everyone. As you may or may not know, my family and I have been attending Free Chapel in Oakwood for a couple years now. Well, I'm finally getting back into ministry mode after a much too long hiatus.

I have been praying about starting a small group for a while and thought, why not combine to great passions in my life - teaching others about Jesus and running.  So, starting on Saturday, January 8th at 8am (yes, 8AM) I will be leading a new small group for runners.  The first meeting will be at my home and after that we will meet every other Saturday.

My plan is to have a devotional and teaching/discussion time and then go for a run together at local parks or other nice running locations when weather permits.  Beginners all the way to experienced runners are welcome, you don't have to be currently attending Free Chapel, and you don't even have to be a believer.  If you are simply spiritually curious, I would love for you to check it out!  My hope is with folks making New Year's resolutions, or needing some accountability (both physical and spiritual), that this will provide an encouraging and uplifting community of people trying to run life's race with endurance.

So if you are interested, leave a comment on this post or contact me through Facebook or Twitter and I'll get you all the information you need.  Keep in mind that if you attend once, it's NO STRINGS ATTACHED.  If you decide it's not for you after visiting, that's OK!  I'd still love to see you, and I'm praying for you.


"Don’t you realize that in a race everyone runs, but only one person gets the prize? So run to win! All athletes are disciplined in their training. They do it to win a prize that will fade away, but we do it for an eternal prize.  So I run with purpose in every step. I am not just shadowboxing.  I discipline my body like an athlete, training it to do what it should."  1 Corinthians 9:24  (NLT)

25 “That is why I tell you not to worry about everyday life—whether you have enough food and drink, or enough clothes to wear. Isn’t life more than food, and your body more than clothing? 26 Look at the birds. They don’t plant or harvest or store food in barns, for your heavenly Father feeds them. And aren’t you far more valuable to him than they are? 27 Can all your worries add a single moment to your life?
28 “And why worry about your clothing? Look at the lilies of the field and how they grow. They don’t work or make their clothing, 29 yet Solomon in all his glory was not dressed as beautifully as they are. 30 And if God cares so wonderfully for wildflowers that are here today and thrown into the fire tomorrow, he will certainly care for you. Why do you have so little faith?
31 “So don’t worry about these things, saying, ‘What will we eat? What will we drink? What will we wear?’ 32 These things dominate the thoughts of unbelievers, but your heavenly Father already knows all your needs. 33 Seek the Kingdom of God above all else, and live righteously, and he will give you everything you need.
34 “So don’t worry about tomorrow, for tomorrow will bring its own worries. Today’s trouble is enough for today." Jesus in Matthew 6:25-34 NLT